With BNNS you can run inference in neural nets, using pre-trained model. As of now, training is not supported, and types of nets you could build are limited to convolution, pooling and fully connected layers, with a limited set of activation functions.

BNNS is CPU optimized. A GPU counterpart was added to Metal Performance Shaders.

Let’s make a digit recognizer based on MNIST database of handwritten digits: 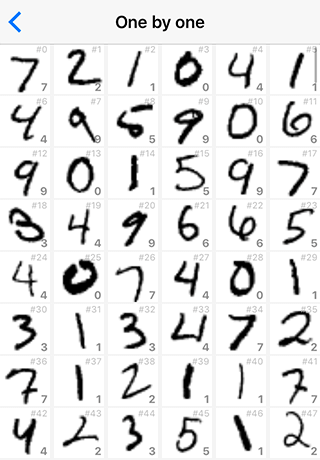 Convolutional network is a good fit for this task. 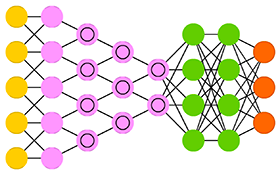 We are going to use TensorFlow tutorial to train a pretty confident model! You can install TensorFlow with Anaconda, if you don’t have one.

I’ve included pre-trained model in the repository for you, but here is the full TensorFlow script from the tutorial to generate the model: mnist-nn.ipynb (might take a couple of hours to train).

Here is an overview of this neural network, with a focus on data transformation (I’m not showing activation and bias here):

Somewhat magically, the last 10 values give probability to each of 10 possible digits. We take the one with maximum probability.

The script writes these model files (weights and bias for convolution and fully connected mul layers):

Before we jump to importing the model into iOS app, let me warn you that BNNS API is somewhat verbose:

Let’s hide this boilerplate, so we can express ourselves in clear:

This is the whole network. Note how data shape is explicitly declared between layers.

There is a bug in BNNSFilterCreateConvolutionLayer crashing on nil for filter_params, and I couldn’t make an empty BNNSFilterParameters in Swift, so this is where BnnsHelper.h kicks in. If you can make it a single Swift file, please let me know.

Are we all set to import the model into our BNNS network? Not so fast.

You might have noticed cryptic transforms at the end of training script:

This is dark magic of data aligning.

BNNS accepts continuous one-dimensional arrays of data, and declares how it will interpret them as multidimensional matrices. We are to abide to BNNS rules when exporting data from TensorFlow.

Basically, BNNS declares that it will read data row by row, by input channels, by output channels.

On the other hand, when we do numpy.ravel in TensorFlow, this happens:

numpy.ravel iterates each dimension in order, starting from the last one. Parameter order='F' would reverse dimensions, but it’s still not what we need. We have to explicitly reshuffle dimensions so that ravel will produce flattened array as BNNS expects it:

We need these transformations for the multidimensional weights data. Bias data is one-dimensional, with nothing to worry about.

I have another script for you that loads model files back into TensorFlow: mnist-predict-from-model.ipynb, reversing these transformations.

Courage! Finally, we have neural network in BNNS, the model is ready, and we are ready to pack everything in a beautiful app. Which I did for you here: 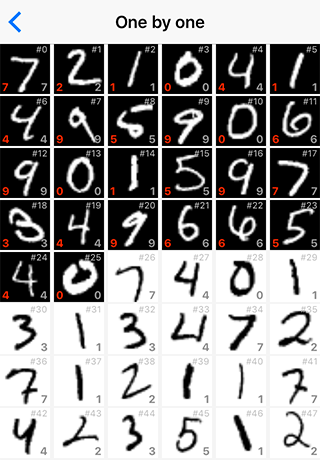 The app loads test data from MNIST (not the train data we trained our model on) – there are 10,000 images to recognize.

There are two modes of operation: pick images to recognize one by one, or recognize the whole page.

Again, I hide BNNS boilerplate under simple BnnsNetwork facade – running the network is as simple as

Update: now you can conjure digits: 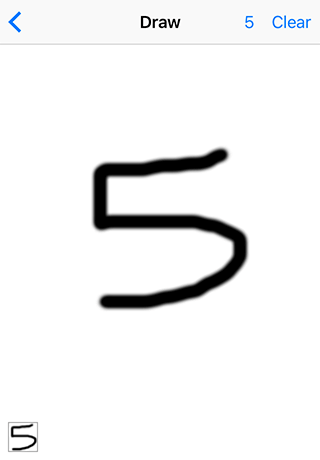 For proper recognition, I’m recreating MNIST preprocessing “by computing the center of mass of the pixels, and translating the image so as to position this point at the center of the 28x28 field”.

Among incorrectly recognized digits there is this couple:

The left one is definitely 8, incorrectly recognized as 2.

The right one is labeled as 2, but recognized as 7. I would argue that this is 7 indeed.

What do you think?